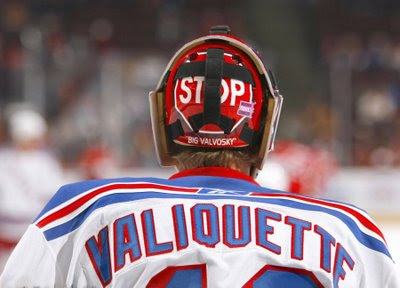 In his '09 debut with the Hartford Wolf Pack tonight in Manchester, NH, Steve Valiquette continued his disastrous play with a 7-1 loss to the Manchester Monarchs. He let up 3 goals on his first 9 shots in the first period and was pulled 9 minutes into the game in exchange for Matt Zaba.  Zaba didnt fare too well either, giving up 2 goals on 4 shots and only lasting a little over 10 minutes in net. Vally was put back in net to start the 2nd period and played the remainder of the game giving up 2 more goals. His final save tally was 26 saves on 31 shots. I cant say that the Wolf Pack played an outstanding game, being outshot 35-20, but with that said Vally still was not on his game. (Full Game Recap @ Our Sports Central)

This is disappointing and truthfully very sad. The hope was to send Vally down to the AHL to work on his game, up his confidence and return (possibly) to the Rangers to keep his spot behind Lundqvist.  As time goes by this is seeming more and more unlikely. In the final year of his contract as a Ranger, Valiquette has very little margin for error. If things keep up, the Rangers are more than likely not going to resign him at year's end, and honestly I cant think of many teams who will be knocking on his door either.
As an NHL caliber goaltender, Valliquette should have had no problem playing in the AHL. We were all wondering if this was just a bad slump, but after tonights performance, it seems like it is a sign of a Rangers future without Vally included.
Posted by NYRangers Roundup at 10:15 PM No comments: